We are happy to present another article from our friend 'Subcommandante'. 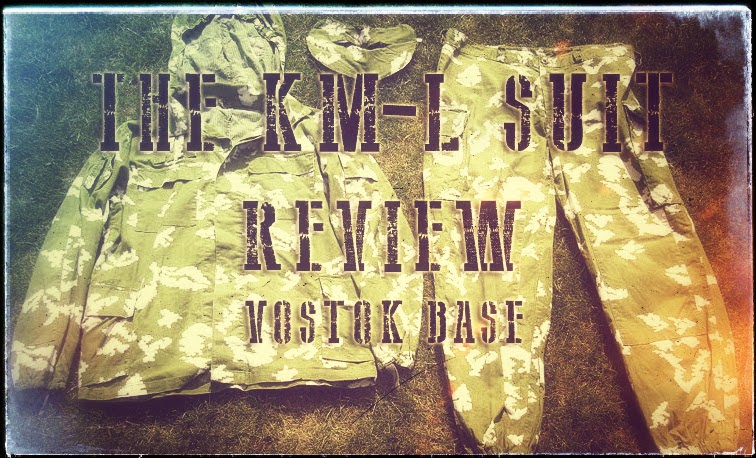 What we have here is a piece of soviet/russian military history, the KM-L suit. This review aims to an overview of this particular cut more than to a comparation. All pictures (unless when noted) come are mine and the three suits are easily recognizable from their color: classic green with silver leaves, the soviet suit; beryozka the cotton SPOSN; Palma amoeba the newer version of SPOSN. 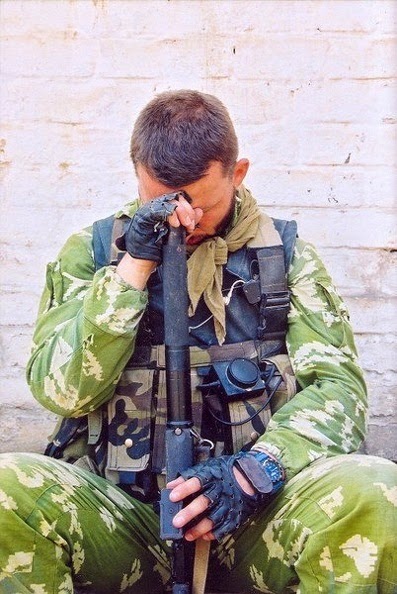 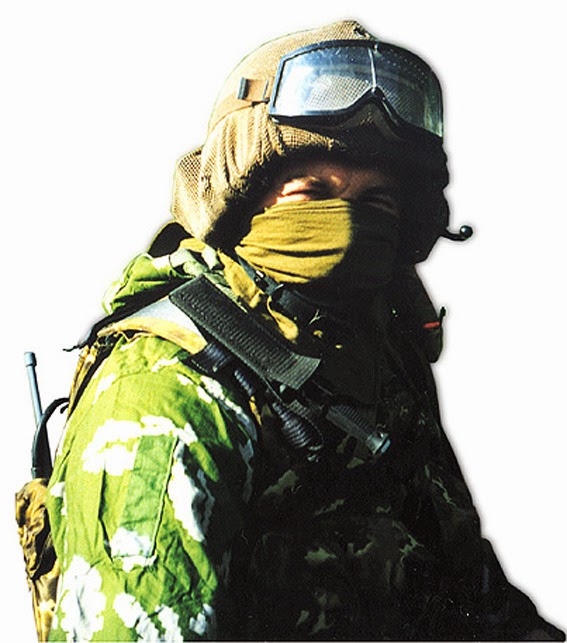 The KM-L was in some way a development of the classic KLMK one piece camouflage oversuit, in soviet times first KLMK came in PALMA and PALMA AMOEBA patterns, to be later on developed in what was called PALMA 2 and is nowadays more commonly known as beryozka (berezka, birch tree) or simply KLMK. The name its self, KLMK (Kamuflirovannyy Letniy Maskirovochnyy Kombinezon) means "summer camouflage suit" more or less, so it indicated any overall for camouflage purposes.
The difference came in the late 70's with the introduction of the KM-L which, unlike it's predecessor, was a two piece combat uniform. The soviets realized that it was far more comfortable to have a proper uniform than to put a second uniform on top of the actual uniform, probably what triggered this discover was the habit of soldiers to wear the KLMK as a uniform instead of a oversuit.
All in all this can also be the reason for the name change: the loss of the M indicates and the shift to the end of the L (that stands for summer) indicates the new purpose of this uniform. The uniform was used along with its predecessor in Afghanistan and many other conflicts, and could be seen on Vympel operators still in the late 90's early 2000. It was produced in many pattern and also by private company's after the fall of the Soviet Union, including the weird and rare brahiva or VSR pattern (VSR is how the pattern came to be known in the west, but it's an awful mistake). 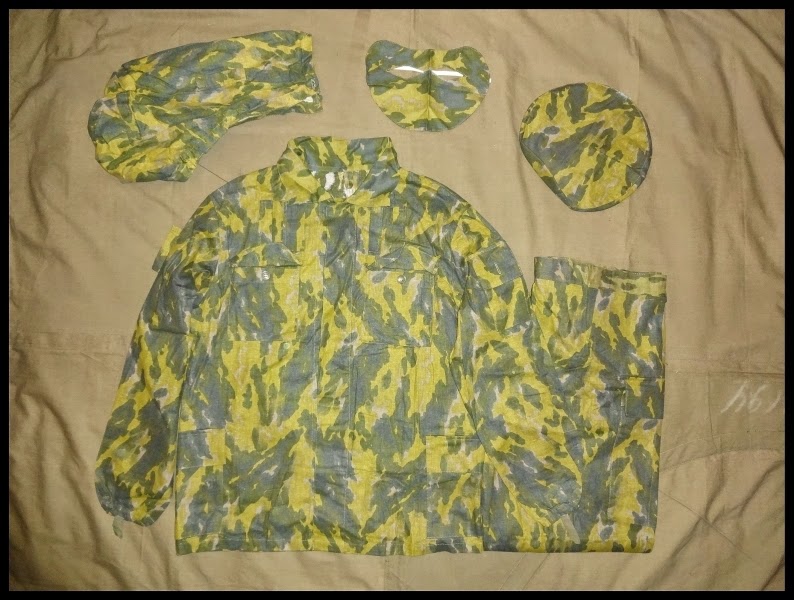 (this picture, and suit, belong to Shoru, a well known German collector and expert)

The most notable change from the KMLK cut was the presence of pockets and the division of the uniform into two pieces. This same cut was retaken and updated to modern day needs - without much success judging from the lack of reference pictures - by the well known SSO/SPOSN company in the late 00' years, around 2006 is my best guess (not entirely sure, this article is open to further updates from those who know more than me).

The KM-L holds a special value to me, since it was my first Russian camo ever, bought by phone call to an infamous Italian seller/collector introduced me by a friend in pre Internet times (the Internet was actually well developed, but in Italy not everybody was up for the change by then).

Then I fell in love with the Palma Amoeba pattern and managed to find a KM-L by SPOSN in that pattern, but size was wrong and since this cut is not as baggy as in oversuits it did not fit me, and I had to sell it. I finally got one my size, and to my surprise, this new model was quite different. Later on I managed to find one in beryozka pattern of the first type. 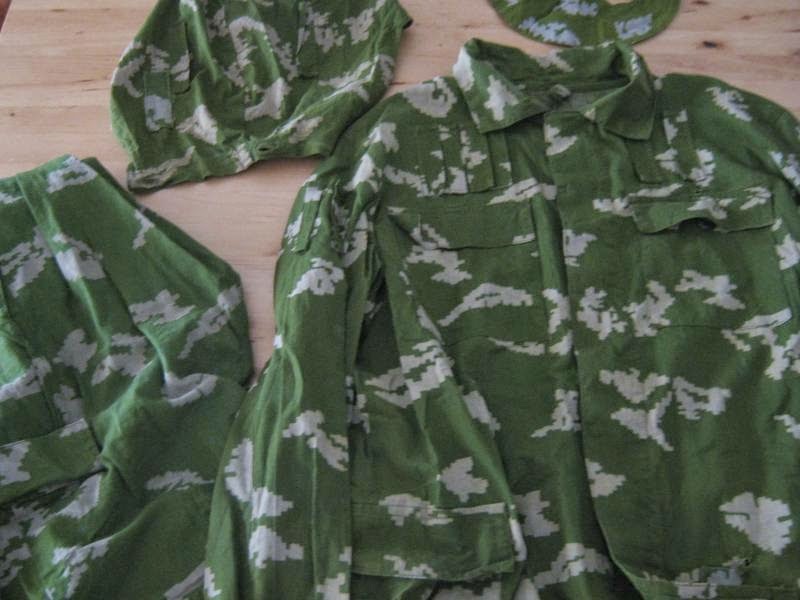 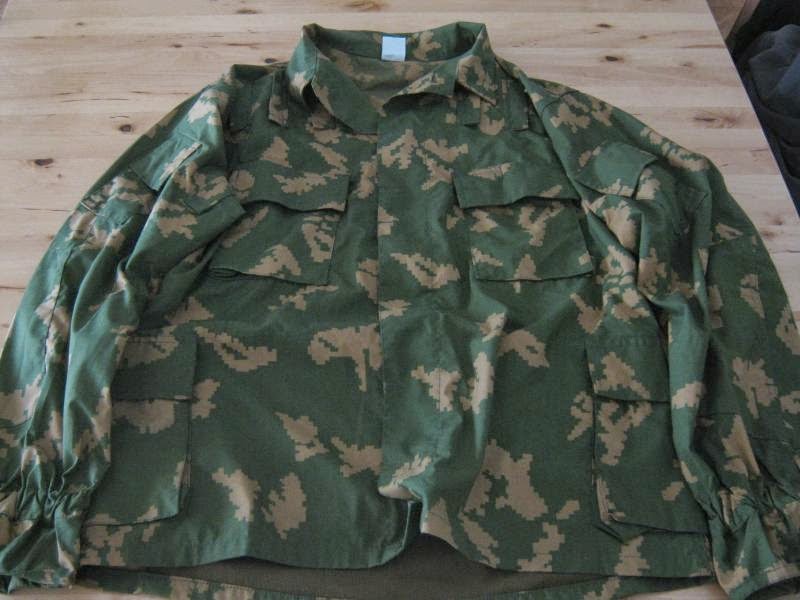 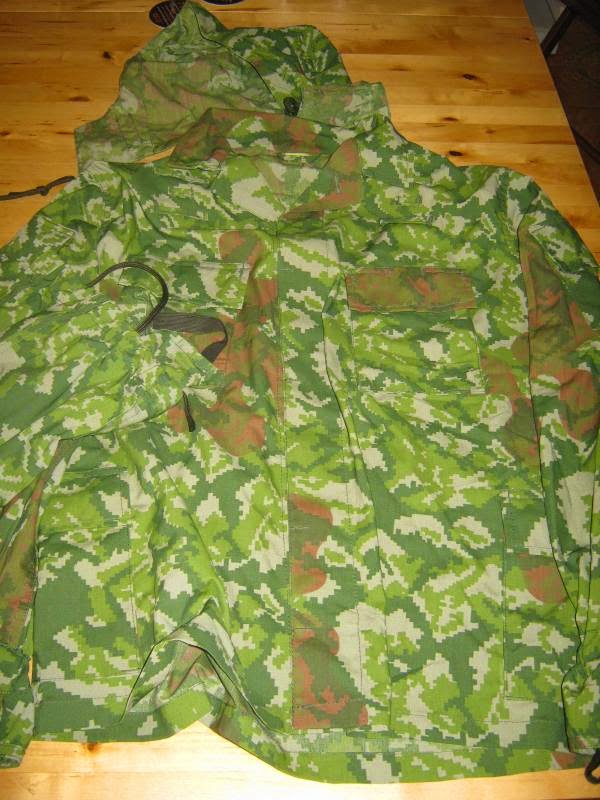 The cut of the jacket is very distinctive: the two front pockets, small pockets on the arms, and the two lower pockets are on the side instead of the front (as opposite to American styled combat jackets like the M64 etc). The hood is detachable on all models, and the soviet top also includes a facemask and a cover for a beret (keep this in mind when you want to buy one: if the seller is not providing those items suit is incomplete).

SPOSN made suits obviously do not include beret cover or face mask, but have some interesting new features: the hood is completely adjustable, there are more loops for vegetation and the pockets have been improved: they close better, there are internal pockets (but only in the older cotton version) and ventilation mesh has been added to the armpits area of the jacket. The cuffs are like most of the SSO/SPOSN cuffs with a sort of skirt to go and cover the hand.
Soviet fabric is just the same as the KLMK suit, earlier versions of the suit don't have the anti IR camo inside, this means two things: first that the same fabric was used for both KM-L and KLMK (which is not surprising at all) second that the first versions of this suit probably came out in the early 70's. The main differences between earlier SPOSN production and contemporary are in the materials (the fabric of this new one seems very bad, scratchy, coarse, quite warm for the summer and 100% synthetic) and the way the loops for vegetations are made and placed. 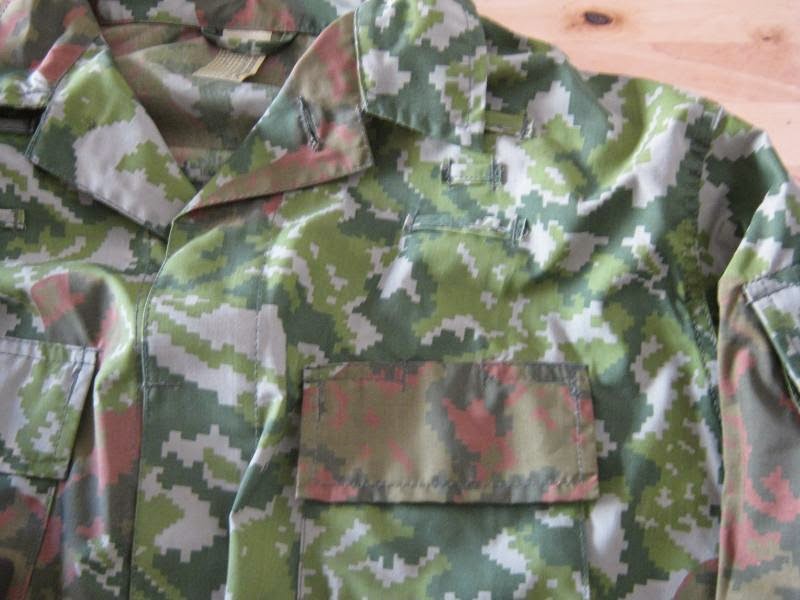 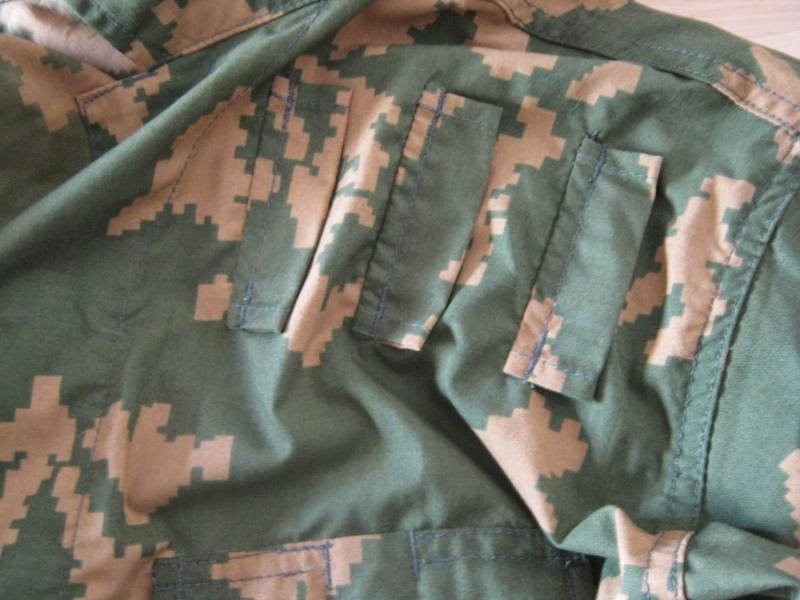 (details of the vegetation loops)

Also the new version has no internal pockets and no ventilation mesh on the butt zone (unlike the Polevoi cut uniform that kept this feature both in older and newer versions). 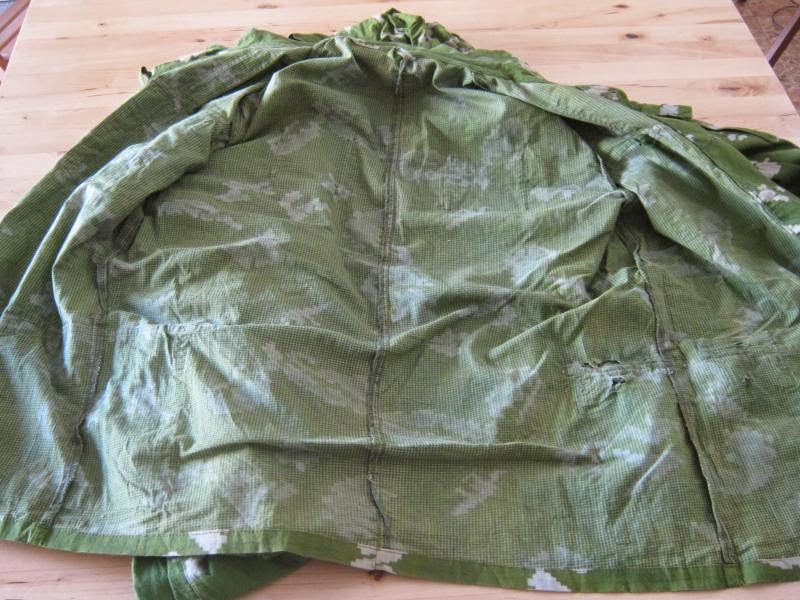 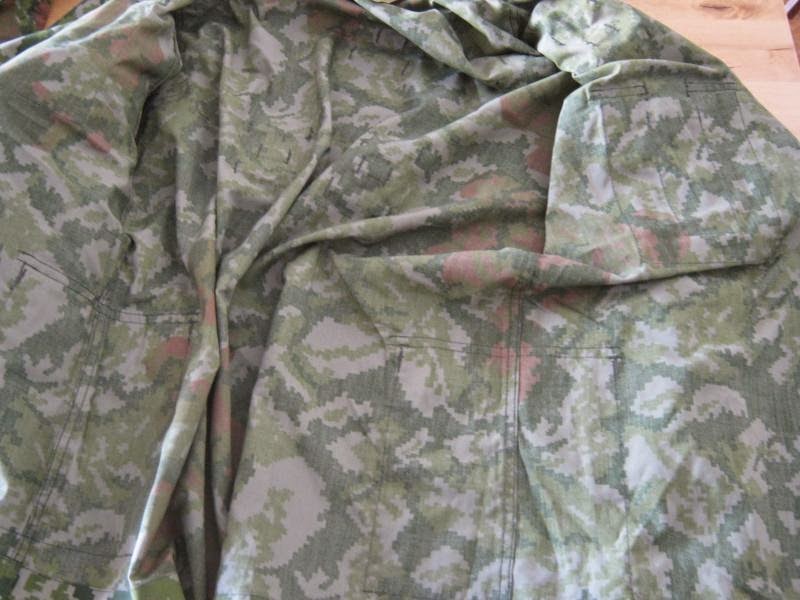 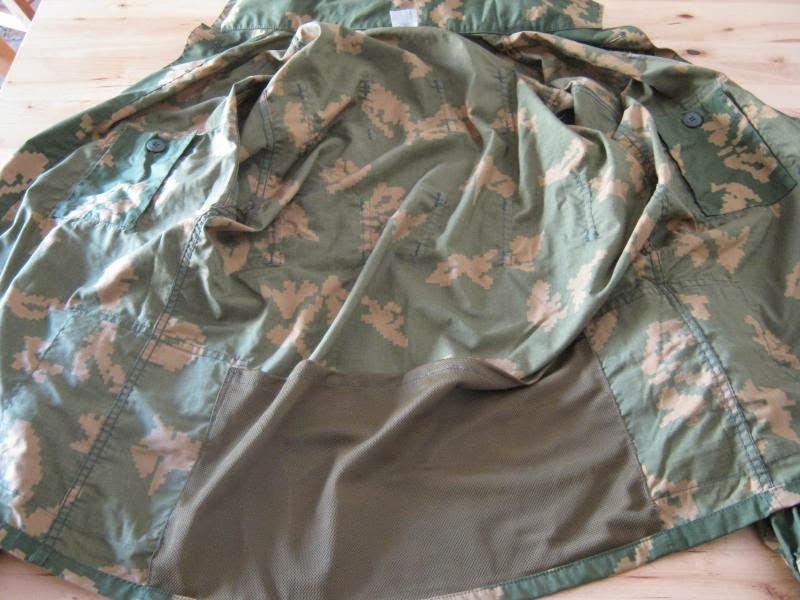 The hoods are virtually interchangeable and they present a few differences. 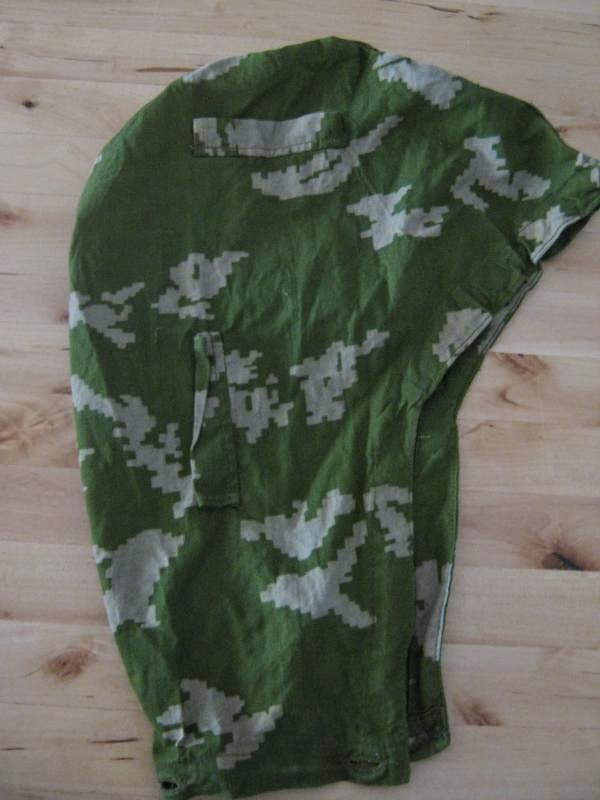 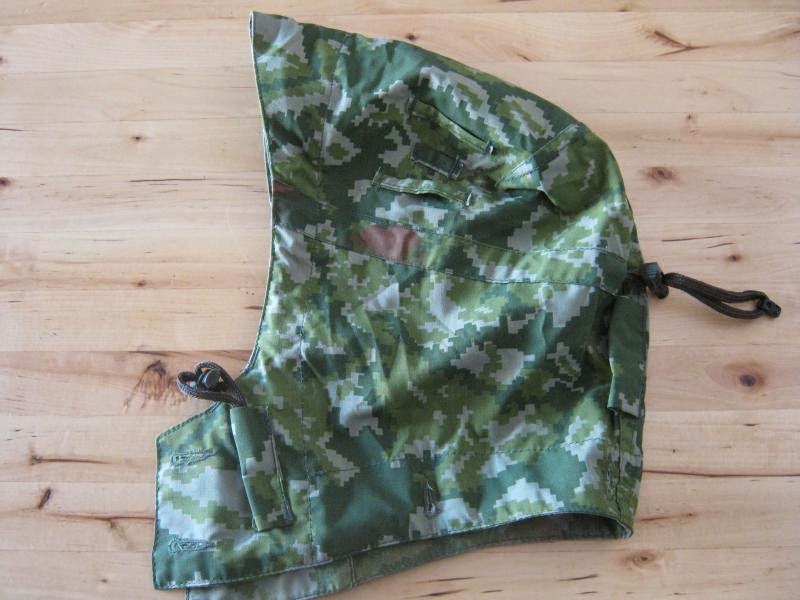 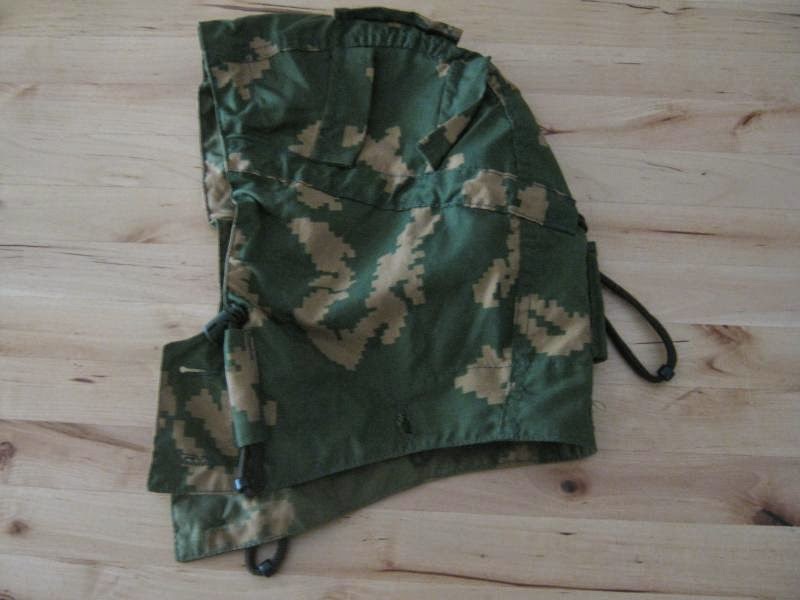 The soviet version's hood is not adjustable, but it's big enough for an helmet (in Beslan there was an FSB guy who covered his Altyn with that!)
The newer version have the loops different as throughout the whole suit, but has also a visor to transform the hood in a sort of cap, which the older version lacks. Solutions found on this hood can also be found in the Polevoi suit, which can be considered a powered version of the KM-L suit. 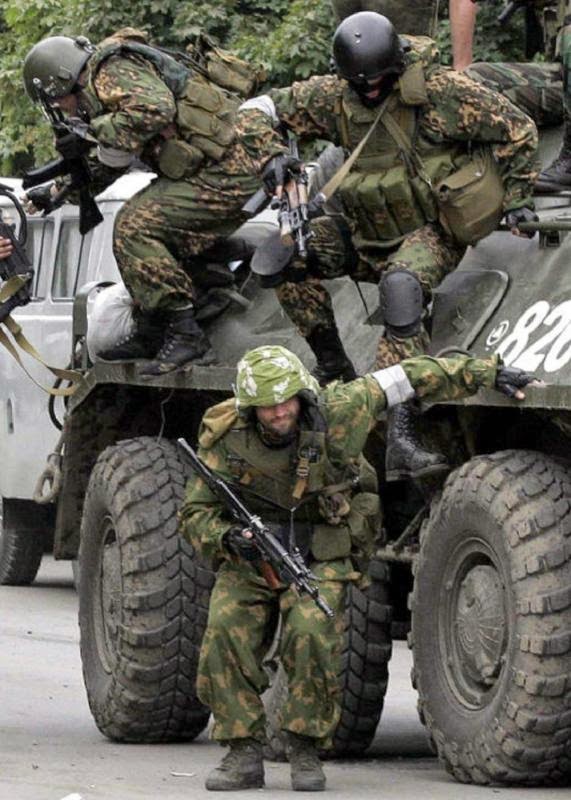 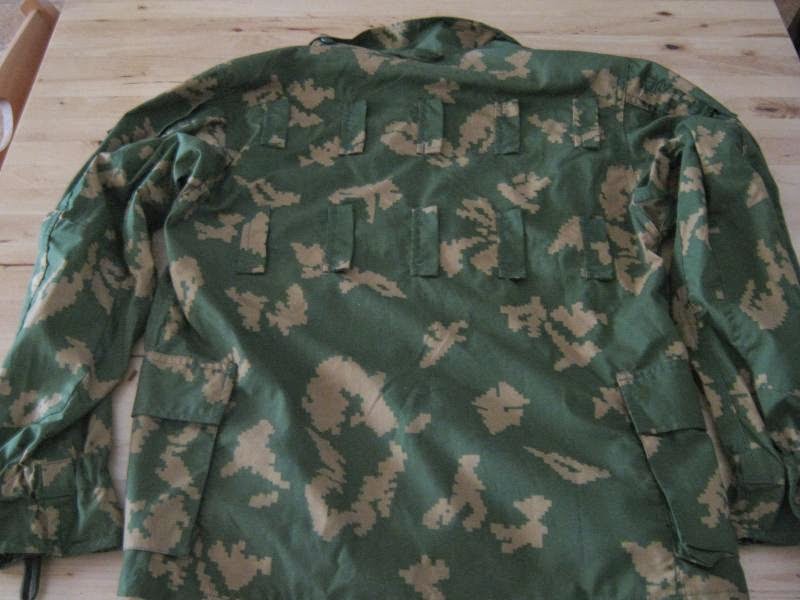 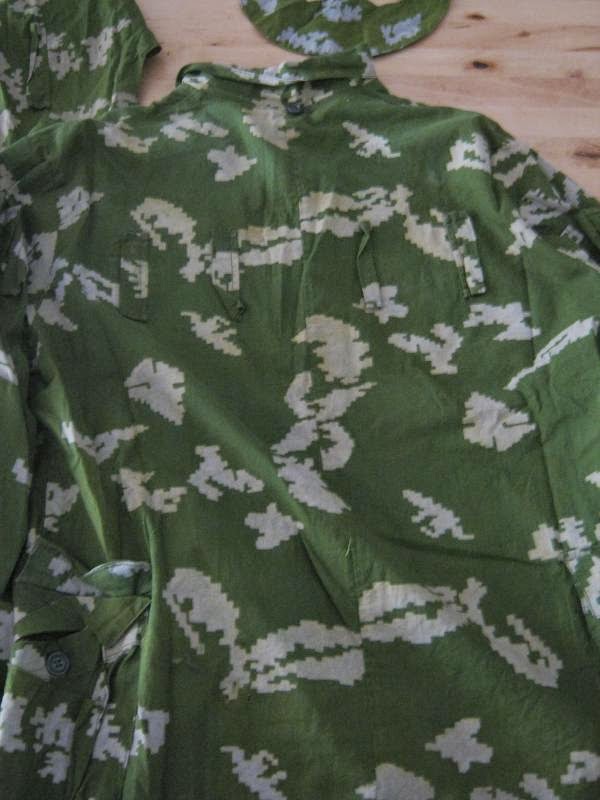 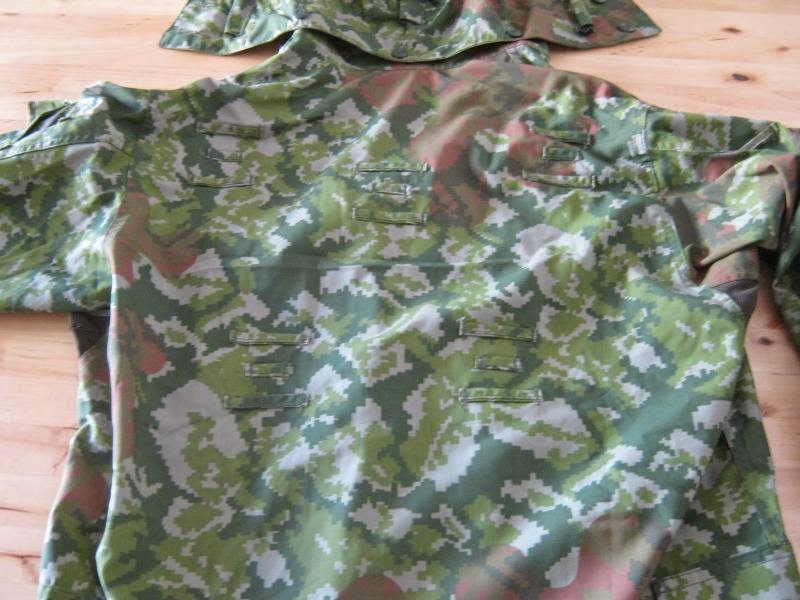 The pants are all very different: the soviet pants only have cargo pockets and those are divided by stitches probably to fit flares rather than AK mags (or Bizon mags as someone stated, whic is rather unrealistic since Bizon hadn't been projected nor invented yet). The ankle cuffs have also a loop to hold the pants in place inside the boots, the flap is closed by buttons. 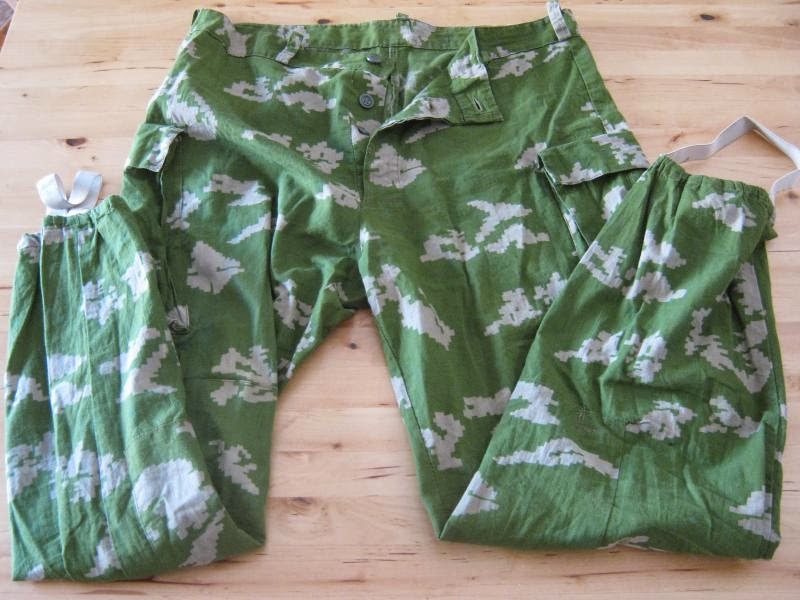 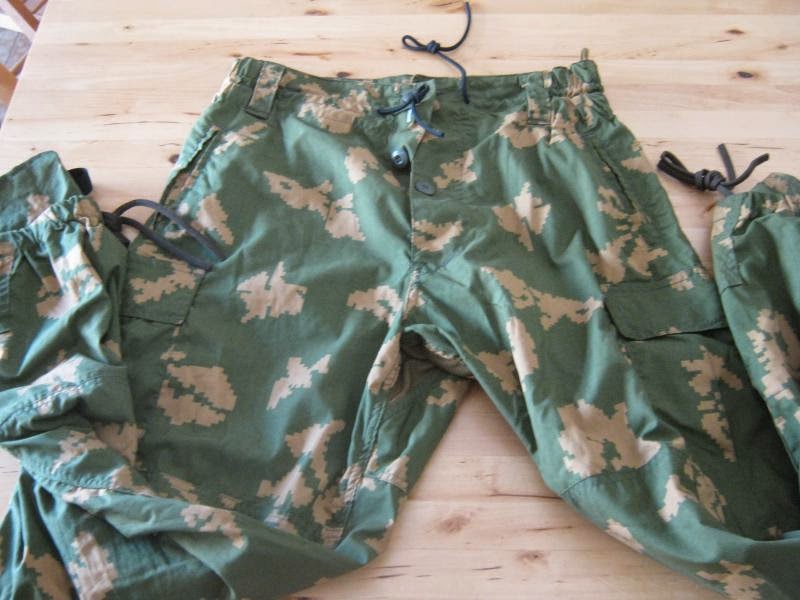 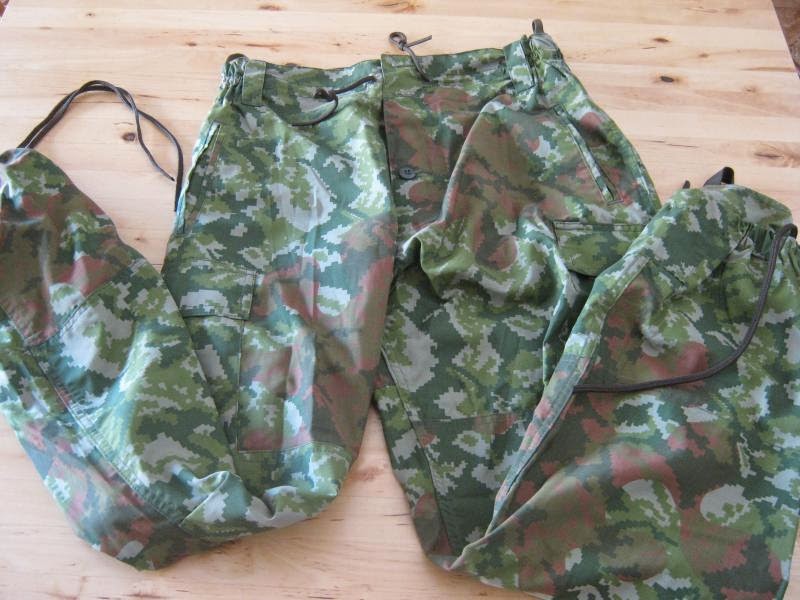 SSO earlier production pants have a closure system like the one found on Flora uniforms or VSRs, and that is now on the Polevoi cut, mixing buttons and a metallic hook. There are a total of six pockets, including regular cargo pockets; there are some sort of gaiters on the end foot keep the pants inside the boots, and those can be tightened by cord. On the legs there are six other loops for vegetation in three different places and on the groin area there is a ventilation mash. Knees regions are reinforced by a second layer of fabric and pants have loops for suspenders as well as belt loops of two different sizes (one inside the other) for belt.
The main difference with the new variant are the different closing system in the new pants and the lack of foliage loops. 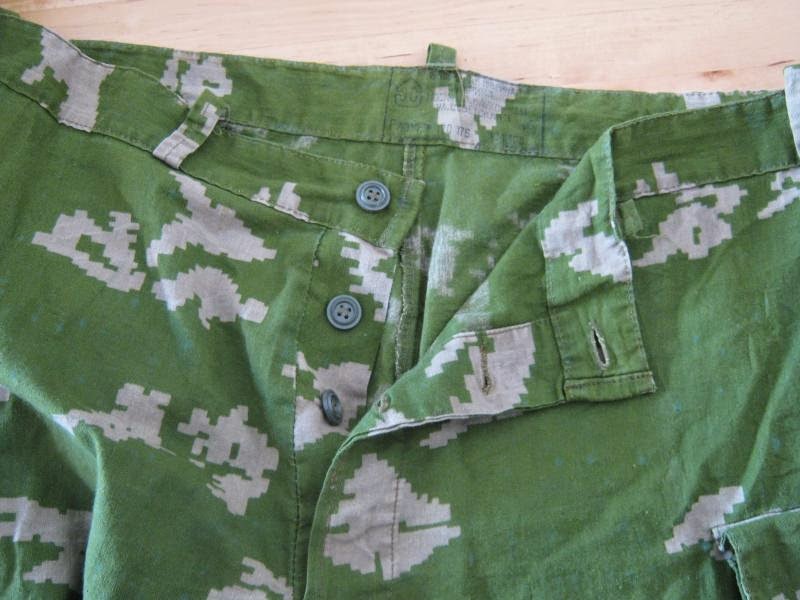 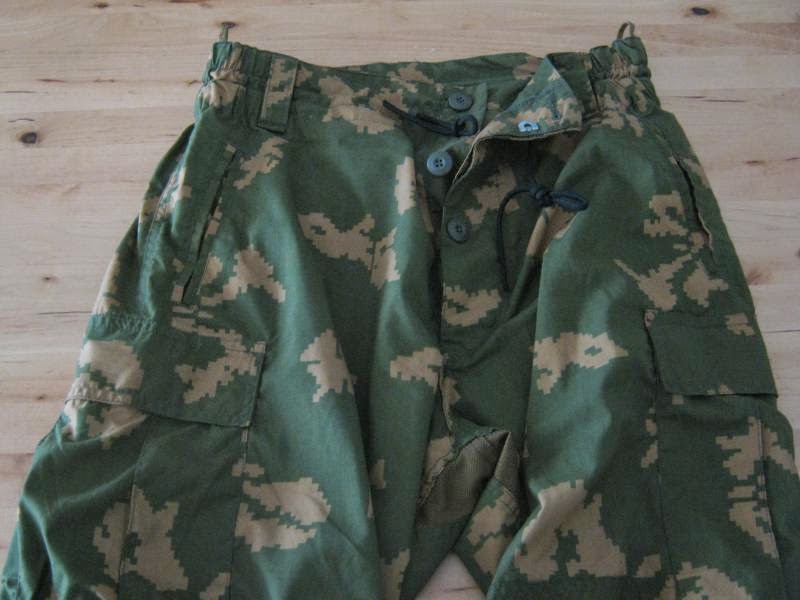 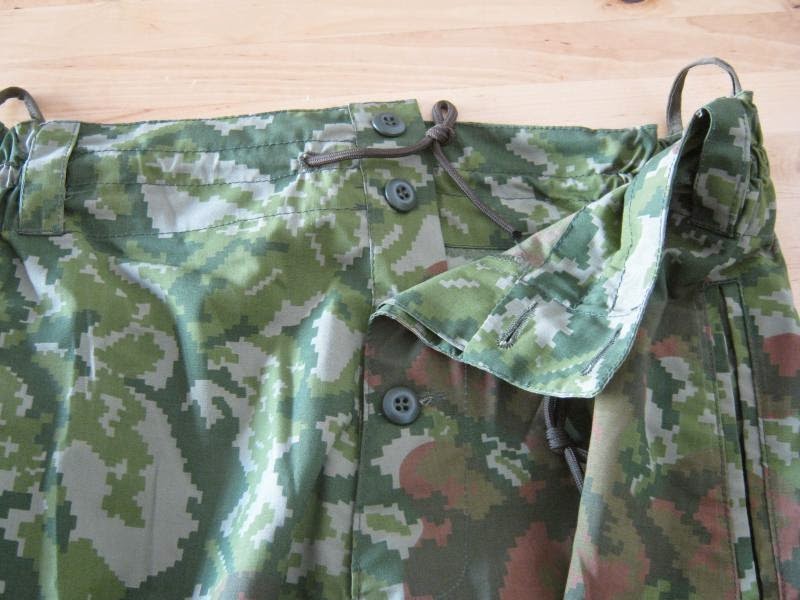 Although old this is a very beautiful suit, quite comfortable and with very innovative solutions, halfway between a classic BDU and a oversuit. SSO version has not been spotted (at least by me) yet in reference pics so maybe is not good for reenactment, but it's damn worth the money it costs!
Here are some random pics from my vault of operators with the soviet suit.
Thanks for reading. 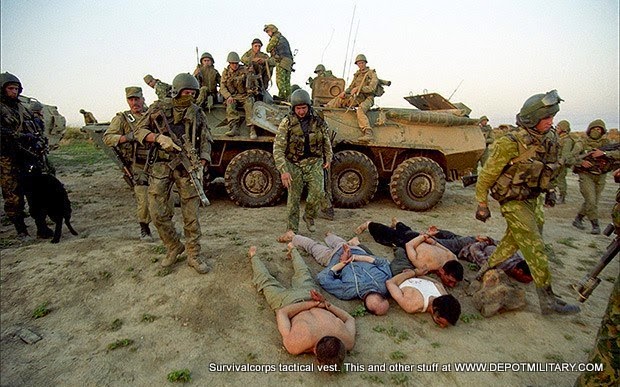 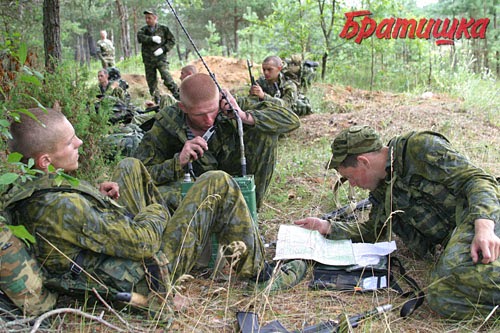 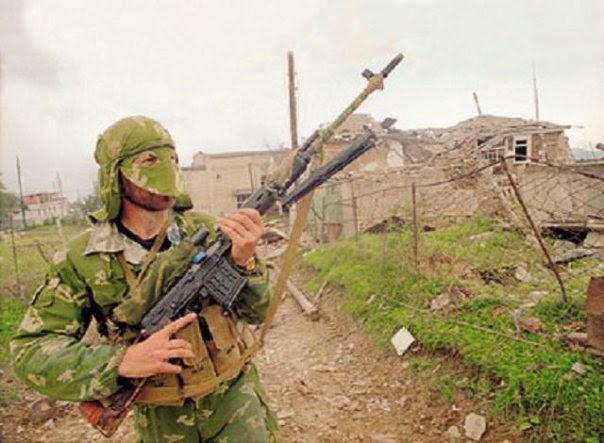 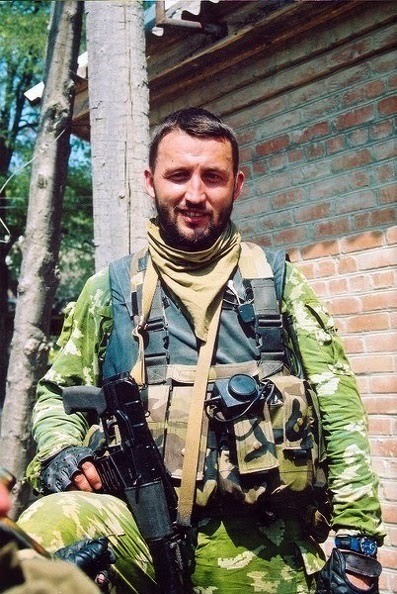